1.World: U.S. economy also slowing amid a downturn in China and Europe

The global economy is expected to slow to 3.3% in 2019 from 3.6% in 2018 in the face of such headwinds as the IT cycle, U.S.-China trade friction, and Brexit. While China (up 6.4% year-on-year in the January-March 2019 quarter), the euro zone (up 1.6%), U.S. (up 3.1%), and Japan (up 2.2%) appear to be experiencing relatively solid growth, the slowdown in the Chinese and euro zone economies is continuing. Both the Japanese and U.S. economies are expected to slow down in/after the April-June quarter as suggested by a build in inventories in the U.S. and a decline in the coincident index in Japan.
After peaking out in early 2018, the manufacturing Purchasing Managers Index (PMI) shifted into a downward trend due mainly to the impact of the IT cycle, and the decline in PMI has accelerated since July 2018 due partly to the impact of U.S.-China trade friction. U.S.-China trade friction is expected to be long-term as the scope is expanded to all imports after the end of June following the G20 summit. Both countries have taken action to switch to imports from other countries. While the effects of tax increases caused through a decline in purchasing power associated with an increase in tariffs are limited to 0.3% of GDP in the U.S. and 0.1% of GDP in China, the global economy will continue to decelerate in 2019, exacerbated by uncertainties posed by Brexit.

2.U.S.: Growth slows to around 1% in the April-June 2019 quarter and subsequently reaches cruising speed with the potential growth rate in the higher 1% range.

Economic growth is expected to slow to 2.3% in 2019 from 2.9% in 2018 which was boosted by tax cuts and defense cost increases. The effects of increases in defense cost and investments in IT equipment during the rise in the IT cycle, which contributed to growth from the previous quarter (approx. 0.4% if annualized), will dissipate in/after 2019. With the dissipation of the effects of increases in asset income attributed to high stock prices and tax cuts in 2018 compared to the previous quarter, the growth of disposable income is projected to slow down. The potential growth rate is expected to decelerate to the higher 1% range where full employment is maintained. The US Federal Reserve Board has maintained the policy rate while considering the need for precautionary rate cuts. Yields on the 10-year Treasury are expected to remain flat in the mid-2% range and underpin housing investment.
Difficulties faced in raising the debt ceiling under the divided government pose the risk of default (around August 2019 if the risk arises). If it becomes a reality, there is a risk of economic recession.

3.Europe: Exports to the UK and China to slow down in the euro zone and potential growth rate to decelerate to the mid-1% range with weak demand

The growth rate in the euro zone is forecast to decelerate to 1.2% in 2019 from 1.8% in 2018, falling below the potential growth rate in the mid-1% range. With high dependence on exports, the euro zone’s core country Germany saw a fall in manufacturing production from the previous year as a result of a slowdown in exports to the UK and China. In Italy, fiscal deficits increased due to the economic recession; government spending is unlikely to expand due to pressure from the European Commission to reduce fiscal deficits. The rise of the far right in the European Parliament elections has made it difficult to respond flexibly when government bonds are sold heavily.
In the UK, the potential growth rate is forecast to drop to the lower 1% range of 1.4% in 2018 and 1.4% in 2019 from the previous norm of around 2%. While a Brexit deadline was postponed until the end of October, the risk of a No Deal Brexit has increased following the resignation of Prime Minister May. If a No Deal Brexit becomes a reality, the UK economy would contract by around 5-8% (estimated by the Bank of England), while the euro zone would also suffer an economic downturn on the back of a sharp drop in exports to the UK.

4.China: Sharp slowdown to be avoided with expansion of domestic demand and a shift in economic structure

China’s economy is forecast to slow to 6.2% in 2019 from 6.6% in 2018. Despite posting solid growth at 6.4% in the January-March 2019 quarter, the manufacturing PMI and mining and manufacturing production declined again in April, leading to an ongoing slowdown. In face of U.S.-China trade friction, the government plans to increase domestic demand by increasing infrastructure investments and facilitating tax and fee cuts (1.5% of 2018 GDP, 1.6% of 2019 GDP) to reduce dependence on the U.S. market. The government is working to transform the economic structure from one that depends on foreign demand, investments, and the manufacturing industry to one driven by domestic demand, consumption, and the service industry. While a slowdown in manufacturing investment is expected to continue due to decline in the IT cycle, China is expected to avoid a sharp deceleration as policy actions would help infrastructure investments to pick up, real estate investments to remain robust, and consumption to bottom out.

Due to the fall in the IT cycle and downturn in the Chinese economy, production and exports have slowed since late 2018, putting Japan on the verge of an economic recession. As Japan plans to raise the consumption tax (from 8% to 10%) in October 2019 amid a difficult external environment, stimulus packages amounting to JPY2.3 trillion, which are limited to the first year, compared to a permanent tax increase of JPY2 trillion/year, would not be enough to avoid a fall in consumer spending in the second half. The lack of a demand driver will prompt a deflationary gap to reemerge, pushing Japan into an economic recession. Japan’s economy is forecast to slow to 0.4% in 2019 and to a negative growth of -0.1% in 2020. 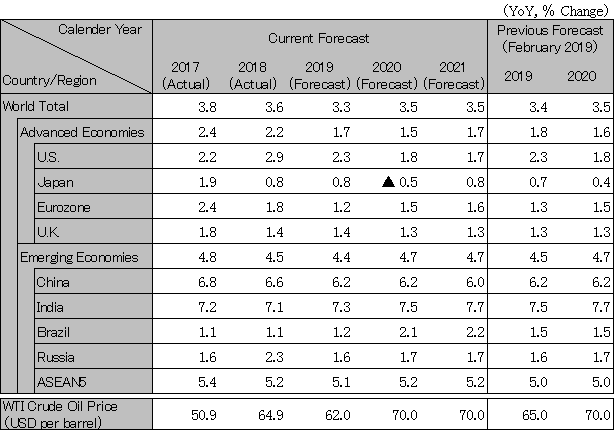