Global economy to recover in 2020 without a particular driving force

Global economic growth will likely end up at 2.9% in 2019, below 3% for the first time since 2009 (down 0.1%), just after the Lehman Brothers collapse occurred. This owes mainly to a cyclical downturn in the IT and automobile industries, US-China trade tensions, and slowing domestic demand in China and other emerging economies. Among emerging economies, growth has slowed in India due to issues with non-performing bank loans and emission regulations, while other economies such as Turkey, Iran, Argentina, and Hong Kong have experienced political turmoil. As a result, the overall growth rate for emerging economies will likely come to 3.8%, below 4% for the first time since 2009.
Global economic growth should recover to 3.3% in 2020 and 3.4% in 2021. Business cycles for industries contributing to the overall slowdown (IT, automobiles, etc.) have bottomed out in the second half of 2019. US-China trade tensions appear to be easing, with the US postponing additional tariffs that had been scheduled for December 2019. Domestic demand in China will gradually recover, with the government continuing to implement economic stimulus measures. The impact of economic stimulus measures is also spreading in India. Growth in emerging economies will likely recover to the 4% range, with growth rates of 4.5% for 2020 and 4.6% for 2021. However, the pace of recovery is likely to be slow in industries such as IT and automobiles, and tensions between the US and China regarding technology and investment are dragging on. Overall, the pace of recovery will be moderate.

2.US: Growth rate to fall to the potential growth rate of 1.8% in 2020, but still poised for consumption-led growth

Due to labor supply constraints, growth will likely slow from 2.2% in 2019 to 1.8% in 2020 and 1.7% in 2021. Because 2020 is a presidential election year, it will be difficult to implement fiscal measures such as tax cuts and infrastructure investment due to conflict between Republicans and Democrats, but economic situation of full employment marked by a consistently low unemployment rate will likely continue. In terms of monetary policy, the Federal Reserve will keep the federal funds rate (upper limit) at 1.75% after carrying out its third interest rate cut in October 2019. With the US and China reaching a “Phase 1” interim agreement, $160 billion in tariffs on Chinese imports (including many consumer goods, for which the US relies heavily on China) that had been scheduled for December 2019 have been avoided. Capital spending will end to decline, and consumer spending will continue to be solid, largely thanks to favorable trends in the jobs market and household income.

The eurozone’s growth rate will likely remain below the potential growth rate of 1.5%, at 1.2% for both 2019 and 2020, and 1.3% for 2021. In 2020, manufacturing production in Germany, which has been stagnating due to a decline in exports, should recover somewhat, but adjustments in the automobile and chemical industries will likely take some time, resulting in a sluggish pace of recovery. On the other hand, France, which is less dependent on exports than Germany, looks set to maintain growth led by consumption. In Italy, the risk of a financial crisis has diminished for now after the Lega party pulled out of the government coalition.
The UK’s potential growth rate, which had earlier been around 2%, looks set to fall to the low 1% range, with a flat rate of 1.3% for 2019, 2020, and 2021. With the Conservative Party’s victory in the December 2019 general election, the country looks set to leave the EU at the end of January 2020 and enter a transition period thereafter. FTA negotiations with the EU are unlikely to be completed by the end of 2020, the deadline for the transition period, but the extension of this period should prevent any turmoil.

China's growth rate will likely slow from 6.2% in 2019 to 6.0% in 2020 and 5.9% in 2021. The government's economic stimulus measures, which have been centered on tax and fee cuts, have helped prevent a sharp economic slowdown. There have been signs of a bottom in China’s manufacturing industry, with the country’s manufacturing PMI recovering to a level above 50 for the first time in seven months in November 2019. To achieve its target of doubling real GDP vs. the 2010 level in 2020, the government will need to maintain annual growth around 6%, which suggests that additional economic stimulus measures are in the cards. Efforts are being made to secure financial resources for local governments and promote infrastructure investment through measures such as accelerating or pushing forward municipal bond issuances and revising central and local government allocation of tax revenues. The government is helping companies raise funds through measures such as revising the benchmark interest rate. Capital spending among manufacturers remains at low levels, but investment is growing within high-tech industries. In terms of consumer spending, smartphone sales will increase following the launch of 5G services. Automobile sales also appear likely to return to an upward trajectory in 2020.

5.Japan: Stimulus measures to support recovery in fiscal 2020 following economic downturn in second half of fiscal 2019

Japan is suffering from an economic downturn in the second half of fiscal 2019 due to the impact of the consumption tax hike as well as damage from natural disasters such as Typhoon No. 19. However, there are signs of a pickup in production of electronic components and devices, backed by a bottom-out in exports to China. The recovery will likely accelerate from the Jul-Sep 2020 quarter thanks to additional economic stimulus package focused on disaster prevention measures. While annual growth will likely slow from 0.9% in fiscal 2019 to 0.2% in fiscal 2020, government spending should push quarterly growth back into positive territory from the Apr-Jun 2020 quarter following two consecutive quarters of negative growth in the second half of fiscal 2019. Japan has slipped back into a deflationary gap as a result of the recent economic downturn, and this will likely continue until the end of fiscal 2021, preventing inflationary pressure from rising. 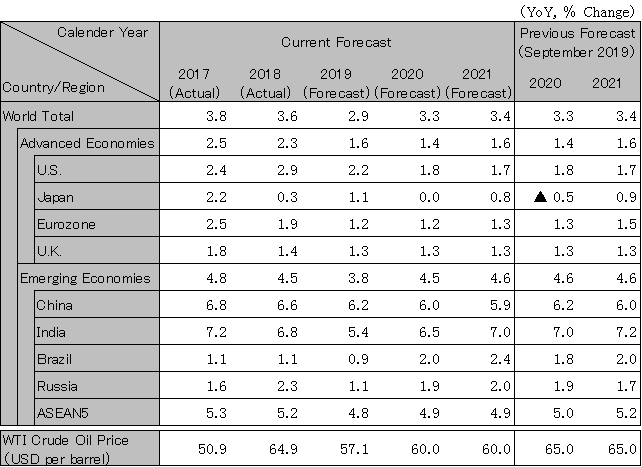