The world economy is recovering although there are unstable factors remaining. The world economy began to creep out of recession during the first half of calendar year 2009, and signs of recovery began to show in the second half of the year. Especially China, it took the initiative and attained high economic growth, 8.7% in CY 2009. Exports to China impacted the production and inventory cycle in Asian countries. Many economies have bottomed out and are recovering as a result of economic stimulus, and recovery is being led by the manufacturing sector.
In the US, fiscal stimulus and the ultra-easy monetary policy has succeeded in stimulating personal consumption and infrastructure, which is underpinning the economic recovery. Starting with Asia, the global economy is recovering as a result of higher production and exports. Turning to Europe, the strength of the recovery is weak, except for Germany and a few other select countries. Moreover, anxiety over the fiscal deficit in Greece undermines confidence in the common European Union currency.
The global recovery is proceeding at different speeds across the globe for two reasons. The first reason has to do with the extent of fiscal stimulus and its economic impact. The second reason has to do with the extent of benefits derived from emerging markets like China. Originally Chinese recovery was also driven by 4 trillion yuan stimulus package. Current recovery trend is the result of policy effects regardless of domestic and external demand.

Although stimulus packages in each country seem to continue in CY 2010, especially in advanced countries, the size of fiscal stimulus will peak out after the summer. The period of easy monetary policy is gradually phasing out. As economic stimulus begins to fade out, the center of concern will gradually shift to domestic demand and the capacity for the economy to establish a self sustaining recovery. Because of the weak domestic demand and the stubbornly high unemployment, the advanced countries will manage fiscal and monetary policy carefully, making sure there are no further unpleasant aftereffects of the collapse of the bubble economy.
On the other hand, China, which is leading the global recovery, is under pressure to deal with an overheating economy and an asset inflated bubble. The government will begin to tighten monetary policy starting from this summer, and, if exports are stable, monetary authorities will begin to strengthen the yuan. The pace of economic recovery will slow down to some extent in the second half of CY 2010.
There are risks present in our forecast: the Euro problems caused by large fiscal deficits in Southern Europe (sovereign risk); anxiety over fiscal and monetary tightening before midterm congressional elections (failure risk in exit strategy), and the effect of monetary tightening in China (failure risk in control of overheating economy) and so on.
In the second half of CY 2010, the pace of recovery in the world economy will slow down for both advanced and emerging economies. The strength of the self-sustaining recovery will be weak. The forecast for global GDP growth this year is 3.7%, 2.9% in the U.S., 0.9% in the EU, 9.0% in China, and 7.7% in India. Japanese yen exchange rates in FY 2010 are forecast to be 90 Yen/Dollar, 120 Yen/Euro, 130 Yen/Pound. Crude oil price will be 80 dollar per barrel in FY 2010.

The Japanese economy is highly vulnerable to risks in foreign countries

So far, the Japanese economy has already bottomed out with recovery in exports to China and eco car/eco point systems underpinning personal consumption. But the domestic market is still shrinking and the recovery in equipment investment is very slow. Under these circumstances, the vulnerability of Japanese economy to a fluctuation in external demand is getting higher.
In FY 2010, the budget for an additional stimulus package is scarce because of deflation and a serious fiscal deficit. Given such conditions, the Japanese economic outlook depends heavily on new schemes to drive economic growth, ways to support households, and ongoing discussions about consumption taxes. These things are important to how strong the Japanese recovery will be this year. In FY 2010, while government investment will shrink, domestic and external demand will gradually recover. The real GDP growth rate in FY 2010 is forecast to be 1.5%. 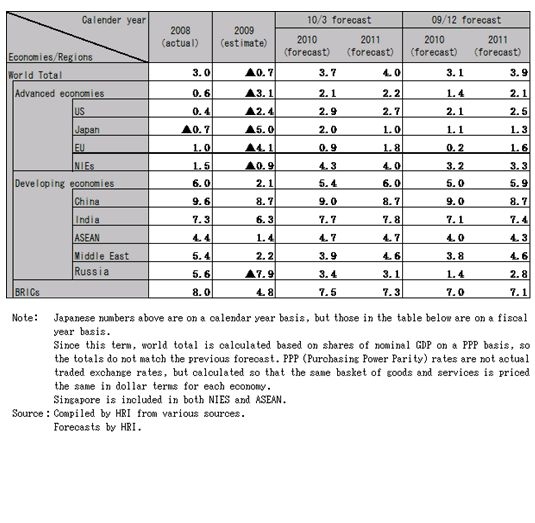 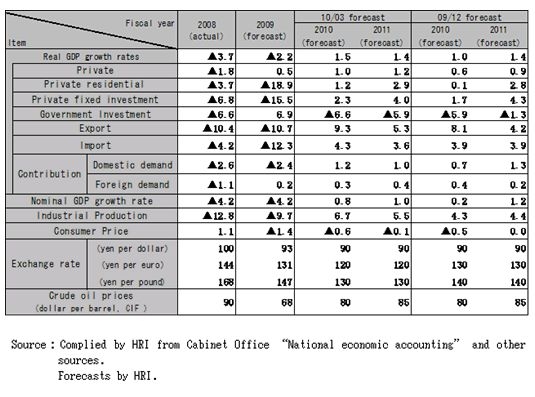