The world economy continues to recover. In the first quarter of CY 2010, not only emerging countries, such as China, but also the United Sates, Europe and Japan saw GDP grow compared to the previous quarter, and the recovery ongoing since mid-CY2009, seems to have solidified. But, the Greek fiscal crisis of April 2010 revealed that the road to recovery is not so clear.
Since Lehman’s collapse, governments are supporting their economies through massive public spending. Due to such fiscal measures, it seems that the financial crisis has ended after one and a half years. But once the risks of bank failure faded away, decreased tax revenue and swollen sovereign debts have become the causes of uncertainty. Even though the Greek crisis was based on a unique context such as problems in credibility of government statistics, it suggests that the problem the world is facing has shifted from blown-up bad assets of financial institutions to blown-up debts by the governments.
On the other hand, in emerging countries such as China, massive government investments and excessive liquidity due to fiscal and financial policies has resulted in real-estate speculation, resulting in the overheating of the economy. Government authorities in emerging countries, having increased reserve rates and are expected to increase policy and lending rates before too long, are being faced with another phase of problems.

Different approaches in managing recovery in the US, Europe and China

The US, already beginning discussions about fiscal reconstruction after having bailed out financial institutions and done stress tests, seems to have reacted properly toward recent transition of the economic cycle. On the other hand, Europe has delayed its actions in dealing with the shift to a different phase of the economic cycle. Due to the Greek crisis, in addition to restriction by having a common currency, the Euro, a delayed recovery is unavoidable for Europe, having no more fiscal capacity. The only favorable terms for Europe are the relative competitiveness of having a weak Euro. In our standard scenario, the forecast for world economic growth will be 3.9% (3.1% in the US, and 0.8% in EU) in CY2010. Currency rates in the latter half of FY2010 will be 90 JPY/USD, 110 JPY/EUR and 130 JPY/GBP. Also, we should assume a risky scenario where the spread of the Greek crisis leads to a broader European financial crisis. In this case, with potential bank failures in the European financial system, among other negative effects resulting from this crisis, we forecast global economic growth of 3.3% (2.5% for the US and -0.2% for EU) for CY2010.
For emerging economies, we should pay attention to the credit squeeze by China. Lending rate increase, and revaluation of the Chinese Yuan are expected in the latter half of CY2010. In spite of concern about a sliver recovery in exports to Europe, the Chinese economy is expected to continue its solid performance, led by domestic demand focused on the continuation of existing projects included in the 4 trillion Yuan stimulus package. We expect economic growth of 9.4% for CY2010 and currency rates of 6.65 CNY/USD and 13.5 JPY/CNY in the latter half of FY2010. But we also expect that the growth rate in the latter half of CY2010 will be slower due to the effect of the credit squeeze.

With the worst fiscal position in the world, the Japanese economy faces tax reform and a need for a growth strategy

Supported by strong Asian economies, the Japanese economy continues its recovery and capital spending seems to have bottomed out, finally. But the only factor, other than strong foreign demand that supports the economy, is an increase in the demand for consumer durables due to government’s stimulus measures, and the employment situation in Japan is still harsh. Sovereign debts, which remain stable since they are primarily owned by domestic investors, pile up to even higher levels, levels larger than those of Greece, making mid- and long-term fiscal reconstruction an urgent issue. We expect that discussions to increase the consumption tax rate will gain momentum in FY2010. Also, we should focus on growth strategies with which the administration party will come up with in advance of the Upper House election.
We are expecting economic growth of 2.1% in FY2010 and 1.5% in FY2011, with a slowdown of the Chinese economy and termination of economic measures by the government. Consumer prices are expected to fall -0.6% in FY2010 and -0.1% in FY2011. 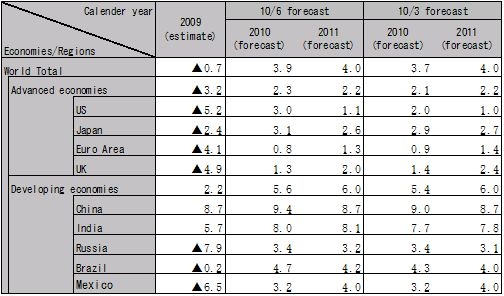 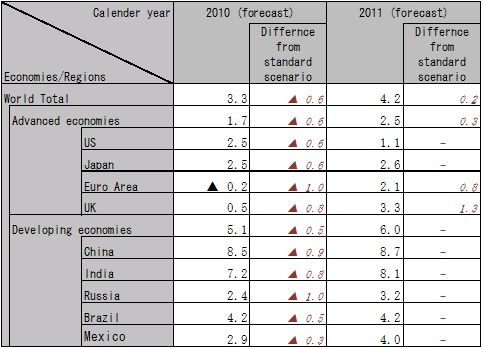 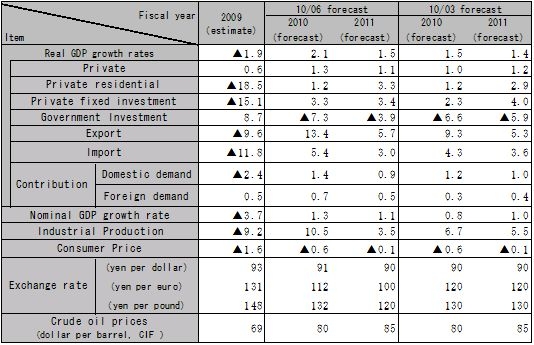