Global stock prices have recovered to the level at the beginning of the year in dollar terms. Oil prices (WTI, dollars per barrel) have recovered from the 20 dollar bottom to the 40 dollar range. The world economy has returned to stability, but still has three uncertain factors in the year ahead. The first uncertainty is the UK referendum about EU membership on June 23. If “Leave” wins, the world financial market will react in turmoil and the EU economy will fall into recession. The second is the timing of US interest rate hikes, which will most likely occur twice by the year end. If the FRB’s timing is not appropriate, it is possible that money will flow out of the emerging countries and their currencies will depreciate rapidly. The third is China’s structural reform. The Chinese economy has to dispense with excesses in production, employment and debt over the next several years. In the meantime, some financial institutions may go bankrupt, its foreign currency reserves may quickly decrease, and the economy may crash in the hard landing. World economic growth depends on deliberation and execution by governments and central banks.

2.US recovery continues. Labor market is tightening. The FRB may raise rates in July.

The US economy decelerated to 0.8% annualized growth rate in the first quarter of 2016, mainly due to the dollar’s appreciation in 2015. The US economy is expected to recover to 2-2.5% growth from the second quarter on, thanks to robust personal consumption and housing investment. There is a strong possibility that the FRB will wait for the result of the UK referendum before raising target federal fund rates from 0.5 to 0.75% in July, as the labor market tightening is leading to higher wages. We anticipate that the FRB will be careful not to surprise the market and cause money outflow from emerging countries, and will raise rates twice to 1% by the end of 2016.

3.Euro area grows around 1.5%, thanks to additional monetary easing by ECB

While domestic demand has stagnated due to fiscal austerity, the Euro area recovery has been led so far by exports to the US and emerging countries, partly thanks to a cheaper euro against the dollar. However, exports to emerging countries, including China, will struggle to grow from 2016 onwards. Nevertheless, austerity measures will not proceed further except in Greece and thus recovery will be led by domestic demand. As inflation is still below the target, which is close to yet below 2%, the ECB will move in July at the earliest and support the recovery by additional monetary easing measures like postponing the end date of quantitative easing, which is currently scheduled for March 2017.

4.China will maintain 6.5% growth in 2016 by balancing supply side reform and stimulus

Fixed investments in infrastructure and real estate have recovered. However, regional disparity can be found in housing prices, which have been rising rapidly in first tier cities like Beijing and Shanghai, and also in fixed investment, which has been decreasing in much of the North-east region where overcapacity sectors dominate. The economic growth rate will fall from 6.9% in 2015 to 6.5% in 2016, which is the bottom of the government target range. The government will reform the supply side by slashing over-capacity and employment, reducing 1.8 million jobs just in steel and coal over the next 3 to 5 years, while it will simultaneously support the economy through monetary easing and fiscal expansion, including infrastructure investment and employment support. It will promote debt equity swap to reduce corporate debt. The government must avoid a financial crisis stemming from excess production, employment and debt, and yet it must ensure more than 6.5% growth at the same time. This balancing act will be very difficult.

The Japanese economy has failed to grow for a year up to the first quarter of 2016, due to sluggish exports to decelerating foreign countries, and stagnant personal consumption caused by slow growth of real total employee incomes. It faced a real risk of recession due to yen appreciation from the beginning of the year and the Kumamoto Earthquake in April. The government had to postpone the consumption tax rate hike from 8 to 10% from the intended date of April 2017 to October 2019. It will also create the second supplementary budget, which probably includes 5 trillion yen of spending, in the fall. The Bank of Japan will move in June at the earliest to undertake additional easing measures like increased asset purchase and more negative interest rates. We expect that the government and the BOJ will collaborate to avoid recession. The economy will grow 0.6% in fiscal year 2016 led by government investment. Private investment will be led by non-manufacturing sectors. Exports will grow to the US and EU. The labor market will get tighter overall, total employment incomes will steadily grow, and personal consumption will begin to grow. Economic growth rates will continue to be over the potential growth rate, 0.5%, eliminating slack in the supply side. Inflation will rise to the target of 2%. 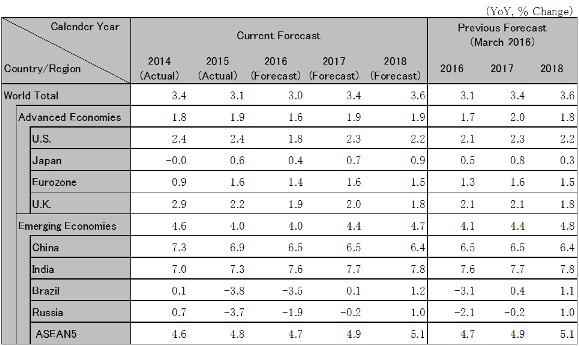