As Risks Widen, the World Economy Will Decelerate in 2019

Growth in the world economy is expected to slow down, from 3.9% in 2018 to 3.4% in 2019, a downward adjustment of 0.1% from the previous forecast. Factors that can significantly impact the magnitude of deceleration are: (1) the direction of Brexit negotiations, (2) expanding trade frictions, and (3) the spread of currency crises among emerging countries. The outlook assumes that (1) Brexit negotiations will reach agreement in November or December and receive parliamentary approval at the last minute in January 2019. However, with a high probability of the British Parliament not managing to reach approval, and considering the lead time necessary, there is a need to prepare for a disorderly Brexit at the end of March 2019. (2) Trade frictions can intensify not only between the U.S. and China but can also involve Japan if they expand to the automotive industry. (3) Countries such as Turkey and Argentina will have no choice but to raise interest rates or tighten budget spending to prevent the outflow of funds, causing the economy in such countries to stagnate. Although it is unlikely that U.S. long-term interest rates will rise while dollar funds rapidly flow back to the U.S., and that the currency crisis will spread to Asian countries such as Indonesia and India, the risk of the currency crisis spreading to Asia remains.

The U.S. economy is growing at a higher pace of 2.6% in 2018, due to stronger capital investment encouraged by full immediate expensing and depreciation allowed as a treatment limited to the first five years under the tax reform and higher government spending in defense, etc. However, housing investment, which drives the business cycle, has peaked. Growth will slow to 2.1% in 2019. The rate of increase in capital investments will calm down. Taxes already imposed on steel and aluminum plus the high tariff on China amounting to USD 50 billion equate to a tax hike worth 0.1% of GDP. If all additional taxes, including the tariff of USD 200 billion on China and taxes on automobiles and automotive parts (equivalent to a tax increase worth 0.7% of GDP) currently being considered are actually imposed, the U.S. economy will contract in 2019. In the case of partial imposition, economic growth is projected to decelerate in 2019. The U.S. FRB will end the 0.25% tax hike of every three months in June 2019 after reaching the economically neutral level of 3%. As a result, long-term interest rates (10-year government bond interest rates) will continue to fall short of 3%.

3.Europe: Disorderly Brexit risk will linger up to the last minute in March 2019; ECB will end its asset buying program by close of 2018

With the projected growth rate of 1.3% in 2018 and 1.4% in 2019, the U.K. is likely to demonstrate slow growth at a lower 1% level, below the potential growth rate of around 2%. Brexit negotiations are unlikely to reach any kind of conclusion at the summit meetings in October and could stretch out until November or December. Prime Minister May will aim at not making a clear-cut deal on the Ireland border issue or acquiring parliamentary approval solely for the extension of the negotiation period, but it will be difficult to make a clear projection until the last minute.
The Euro zone is likely to decelerate over 2019 from 2.0% in 2018 to 1.8% in 2019, a level comparable to the potential growth rate. The impact of the Turkish currency crisis on Euro banks will be limited, and the ECB plans to end its asset-buying program by the end of the year as scheduled and adopt an exit strategy. Meanwhile, the ECB will not rush into raising interest rates and will maintain the monetary easing approach to support the economy. Italy, run by the Euroskeptic administration, might clash with the EU over fiscal policy rules, which poses the risk of a recurrence of the EU debt crisis.

4.China: Government will convert to economy-focused strategy while continuing to advocate restraints on financial risks

China is likely to maintain stable growth despite a slowdown from 6.6% in 2018 to 6.3% in 2019. In the very short term, the economy is expected to decelerate, due mainly to restrained financing to control financial risks, less active infrastructure investments in reaction to the rise in 2017, and U.S.-China trade friction. The government will shift its policy to focus on economic measures although it will maintain the approach of restraining financial risks. In addition to lowering the deposit reserve rate, the government will request that banks increase lending to SMEs while allocating more funds to high-speed railways and other infrastructure investment projects. The weak yuan trend in connection with monetary easing will add challenges to the U.S.-China negotiations and keep tariffs imposed, which will not contribute to boosting trade. However, consumption remains strong and the risk of rapid economic deceleration is likely to be limited for the time being.

5.Japan: Economy to decelerate after the consumption tax hike in October 2019; risk of recession if government spending runs out of breath

While Japan is expected to grow at 1.1% in fiscal 2018, driven by personal consumption and capital investments, it will be difficult to maintain the level of potential growth rate (1.1%) due to labor shortages and other supply constraints. Growth will decelerate to 0.5% in fiscal 2019 due to factors including the consumption tax hike (from 8% to 10%) in October. To prevent an economic downturn caused by a slump in real income, the government is ready to spend funds above the tax increase on measures, such as reduced tax rate on foods, free pre-school education programs, and benefits for pensioners. However, the government cannot continue to activate public spending year after year in fiscal 2020 and beyond. There is a risk of economic recession, if the construction demand associated with the Tokyo Olympic and Paralympic Games goes full cycle while auto exports slow down in connection with the trade friction with the U.S. If the U.S. decelerates and the FRB turns to lower interest rates, the BOJ will not have the leeway to lower interest rates, which may lead to further appreciation of the yen as the U.S.-Japan interest rate differential shrinks. 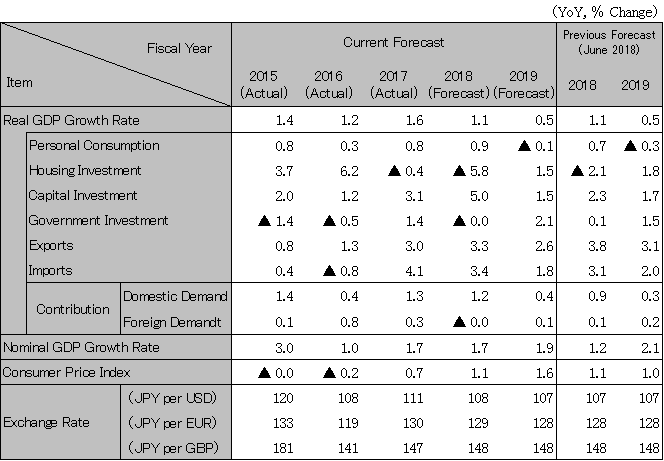