Stock markets throughout the world responded negatively to oil prices (WTI), which fell below $30 a barrel at the beginning of 2016, and financial markets showed concern about China regarding its policy aiming at a cheaper yuan. Oil prices are expected to remain in the $30 range, which will reduce the shale oil supply by US operators and gradually restore the balance between supply and demand toward 2018. The financial market saw turbulence caused by China’s awkward communications with the market about its decision to stabilize the yuan against a 13-currency basket. The world economy felt downward pressure with risk aversion of investors, worrying financial conditions in oil-producing countries, and lower profits of energy companies and banks. However, the G20 meeting of financial ministers and central bank governors, which was held on February 26 to 27 in Shanghai, adopted a stance to support the world economy, pushing back concerns of a hard landing for the Chinese economy. The world economy is expected to keep slowing down with a growth rate of 3.1% for 2015 and for 2016.

While the U.S. economy is expected to see a slowdown in growth from 2.4% in 2015 to 2.1% in 2016, recovery is likely to continue with consumer spending and housing investment taking the lead. Given weakening exports with the slowing world economy, diminished investment in shale oil because of cheap oil and concerns about the turmoil in the financial market since the beginning of 2016, the Federal Reserve Board (FRB) is expected to delay raising interest rates. As a result, the lower long-term rate is likely to bring down the interest on car and housing loans, and consumer spending is expected to remain healthy as the real disposable income of households increases with more jobs, higher wages and lower gasoline prices. There is room for an increase in housing investment with a shortage in the housing supply. With the upward trend of the dollar halted, the decline in export competitiveness is likely to come to a stop.

3.Risks of European slump: Banks’ deterioration in lending capacity, Greece’s withdrawal from the Eurozone and Britain’s decision to leave the EU

Uncertainty about the European financial situation spread as bond prices, notably for Deutsche Bank, dived at the beginning of 2016. European banks have been slower to deal with their bad loans compared with those in the U.S., thus, the European Central Bank (ECB) is expected to announce additional financial easing measures at its March 10 meeting. However, a further cut of negative interest rates from -0.3% to -0.4% is expected to hurt banks’ profits, therefore affecting their capacity for lending. The growth rate of the Eurozone is likely to slow down from 1.5% in 2015 to 1.3% in 2016. Greece may withdraw from the Eurozone if it gets insufficient help from the European Union (EU) on its debt restructuring and the influx of migrants, while whether Britain will stay in the EU depends on the result of the June 23 referendum. If these become more immediate risks, a recession caused by subsequent economic turmoil may occur.

4.Chinese economy is expected to bottom out in mid-2016. With the dollar’s strengthening in a respite, pressure on devaluation will be eased

China’s official statistics will show further growth in the service industry, with a moderate slowdown in the overall growth rate from 6.9% in 2015 to 6.5% in 2016. China intends to support its economy with expanded infrastructure investment and financial easing as well as reduce over production capacity and housing inventory with supply-side structural reforms. The economy is forecast to bottom out in mid-2016 as the government is expected to disclose vigorous measures such as more public spending after the National People’s Congress in March. Because of the FRB’s delays in raising rates, the yuan-dollar rate throughout 2016 is anticipated to remain at around 6.58 yuan to the dollar, to which it dropped at the year’s start, and the pace of capital drain is expected to slacken. From 2017, the dollar is likely to get stronger, with the yuan falling gradually to the dollar to 6.61 and 6.65, respectively, in 2017 and 2018.

The Japanese economy suffered negative growth of 1.4% for the period from October to December 2015 compared with the previous quarter. A downturn of the stock market and a stronger yen since the beginning of 2016 is worsening business sentiment. On January 29, the Bank of Japan introduced a negative interest rate (-0.1%) and is expected to push ahead with more easing measures after March. As income increases with cheap oil (expected contribution of 0.5% to GDP), execution of the supplementary budget for FY2015 (contribution of 0.1%), and a spike in demand ahead of the consumption tax hike from 8% to 10% that is planned in April 2017 (contribution of 0.2%), which are all likely to back the economy, growth of 1.1% is anticipated in 2016. If the recovery trajectory of the U.S. economy is real, the spread between the rates of the two countries will widen, causing the exchange rate of the yen against the dollar to fall again with a moderate downward trend to 115 yen in 2015 and 120 yen in 2016. 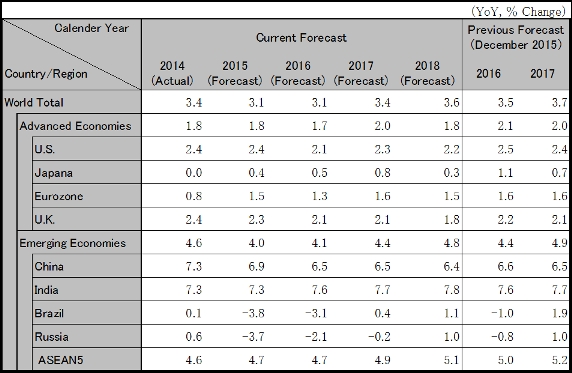 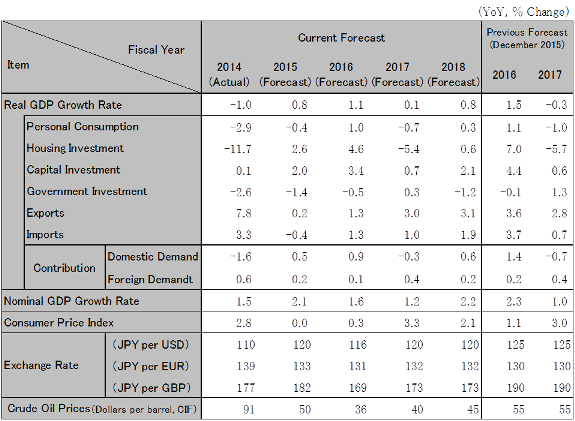