As the world economy passed through the Great Recession, the international coordination was initially solid. But it quickly lost their luster with the Greek sovereign debt crisis. Major advanced countries quickly turned to fiscal austerity, giving up the possibility of further economic stimuli.
The private sector demand is still weak in many countries, although recovery was expected to be self-sustaining as the impact of the economic stimulus packages by the government began to taper off. In the US, the household debt is so large that private consumption, which accounts for a major portion of overall private demand, will not quickly bounce back amid the sinking stock prices and real estate prices. Moreover, consumers in the US and Europe have lowered their expectation of future growth rates. This prevents the private enterprises from boosting capital investment and/or expanding employment. The world economy definitely lacks aggregate demand.

The US swiftly came back with a quantitative monetary easing policy, recognizing that its path of recovery is fairly unstable. Consequently, the gap between the long-term interest rate of the US and that of Japan narrowed, which led to a very strong Japanese yen for the first time in fifteen years. The US and Euro countries implicitly welcome this currency depreciation which helps to drive their exports.
On the other hand, China also swiftly revived the cheap currency policy to keep its own competitiveness. Thus, it is as if the major countries are playing a "currency depreciation game".

Will the world economy take a "double-dip"?

The US shows instability, and China is slowing down, too. It is apparent that the world economy as a whole has entered an unstable phase now. But the emerging economies keep growing strongly, which results in the world economy not falling into the "double-dip". Our forecast of the growth rate for the US is 2.6% in CY2010, and for the Euro Area, 1.4%. For CY2011, the US growth will be 2.2% whereas Euro Area 1.0%. The risk of the economy taking a "double-dip" is still there, however. Some financial shock, such as a sudden crash in the stock market, could cause the economy to take another dip.
China will grow 9.5% in CY2010, and 8.5% in CY2011. Since the government of China is now tightening the financial market, the influence of that tightening will remain there until the first half of CY2011.

The Japanese economy is struggling without any effective policy

The strong yen has damaged the export-driven Japanese economy. This may also accelerate the hollowing out of manufacturing base. We estimate that an appreciation of five Yen per Dollar will reduce Japanese GDP by 0.3 percentage points. Also Japanese policy is really in turmoil.
But there is a possibility that the government and BOJ apply put the breaks on the accelerating trend of an appreciating Yen. We expect the exchange rate for the US-Dollar to be 85 Yen/$; for the euro, 110 Yen/Euro in FY2010, and 100 Yen/Euro in FY2011. We also expect 1.8% GDP growth in FY2010, slowing to 1.5% in FY2011, due to the slow down in exports caused by the instability of the world economy and the strong Japanese yen. 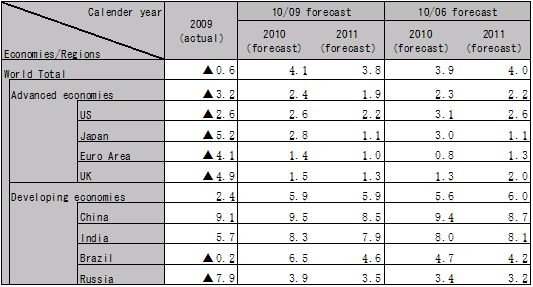 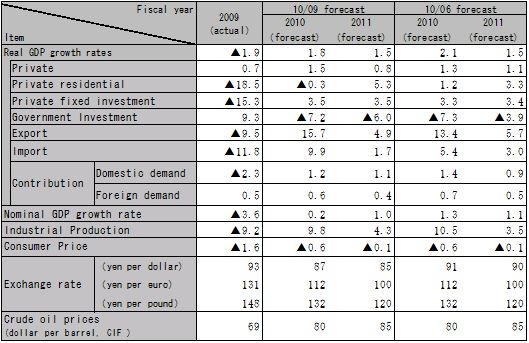