The World Economy Will Decelerate in 2019, While Japan Will Also Face Challenges in the Second Half of 2019

While the world economy is expected to grow at 3.9% in 2018 due to the continuation of the cyclical recovery phase, it will decelerate to 3.5% in 2019 due to three headwinds caused by the America First policy: (1) U.S. long-term interest rates have risen to the highest level in seven years due to the expansion of the U.S. budget deficit, while funds flow out of emerging countries with dollar-denominated debts and political uncertainties such as Argentina and Turkey, planting the seeds for a currency crisis; (2) Trade frictions started with the U.S. imposition of high tariffs on the importation of steel and aluminum and now the target areas and items are expanding; and (3) Oil prices have risen to about 70 dollars/barrel for the first time in four years due to concerns over turmoil in and supply from the Middle East after the U.S. cancellation of the Iran Nuclear Agreement, in addition to lower production in Venezuela.

2.U.S.: The rapid pace of the Fed’s interest rate increases (four times in 2018 and three times in 2019) will slow down the economy

While it is expected to grow faster in 2018 at 2.5% than in 2017 at 2.3%, reflecting the fiscal expansion, the U.S. is likely to decelerate to 2.1% in 2019, with the slowdown in demand for automobiles and housing investment due to the rise in long-term interest rates. Due to the concern that fiscal expansion under full employment might invite inflation, the Fed is expected to increase interest rates at a rapid pace in order to surpass an economically neutral level (around 3%) at the end of 2019. Long-term interest rates (10-year Treasury yields) have already risen to the lower 3.0% range. If they rise to the higher 3.0% range, there will be a risk of a recession in 2019. Congressional ratification may not be provided in time for NAFTA renegotiation by the end of 2018; therefore, uncertainties over the magnitude of the increase in the local content ratio for automobiles, etc. will continue and investment in North America will be negatively impacted.

3.Europe: Economic activities are expected to enter a maturity phase and decelerate over 2019

The Euro zone is likely to decelerate over 2019 from 2.2% in 2018 to 1.8% in 2019. The main supporter of economic activities is expected to change from companies to households with the income environment on an improving trend, while the continuously deteriorating business sentiment is weakening corporate activities in Germany, France and Italy at the moment.
Germany is facing supply constraints, and the ECB is expected to end the purchase of new assets by the end of 2018 and start raising interest rates in the second half of 2019. When the U.S. starts imposing tariffs on steel and aluminum that have been postponed, the EU will impose retaliatory tariffs, continuing trade frictions with the U.S. There is a concern that the new Italian government will ignore EU rules to implement expansionary fiscal policies and issue mini government bonds, which could lead to the introduction of a de facto parallel currency and become the seed for a European debt crisis.
The U.K. is expected to grow at a moderate pace of 1.3% in 2018 and 1.4% in 2019. Manufacturing investment is restrained due to the uncertainties over Brexit, including the unforeseen resolution of the Ireland border issue. With the inflation rate still above the policy target of 2%, the U.K. central bank may raise interest rates within this year, which will push economic activities downward.

4.China: Consumption is expected to be supportive despite the deceleration of investment due to restraints on financial risks

China is likely to slow down but grow stably at 6.6% in 2018 and 6.3% in 2019. Overheated at 6.9% in 2017, it is in the process of coming to a potential growth rate in the lower 6% range. The new government, which was inaugurated in February 2018, advocates restraints on financial risks and restrains financing through shadow banking by local governments, etc. In total, social loans (flow) at the end of March were less than in the previous year, pushing the economy downward, particularly in investment area. Restraints on housing bubbles also cool down housing-related consumption. On the other hand, solid employment, the expansion of the middle-income group and the convenience of online shopping are expected to keep overall consumption solid. As a result of the U.S.-China trade negotiations held on May 17-18, it was temporarily shelved due to the promise to increase imports in order to reduce the U.S. trade deficit with China. It is difficult to comply with the U.S. demand to reduce the deficit by 200 billion dollars in two years because it is equivalent to 0.7% of China’s GDP ($14 trillion in 2018). Trade and investment frictions are likely to continue.

5.Japan: The increase in the consumption tax rate in October 2019 will be a challenge, despite the scheduled economic stimulus package for mitigating the impact

January-March 2018 saw negative growth for the first time in 9 quarters due to temporary factors such as the adjustment of smartphone production and bad weather. Nevertheless, the momentum of economic recovery is continuing to maintain the recovery, with growth at 0.8% in 2018 and 0.5% in 2019. The growth rate is likely to decline to the potential growth rate (0.8%) due to the lower real purchasing power of households resulting from higher crude oil prices and the supply constraints from the labor shortage, although the BOJ’s continued monetary easing is expected to support the recovery of capital investment and consumption. Along with the increase in the consumption tax rate (8→10％) in October 2019, the government plans to implement an economic stimulus package, including housing and automobile related tax cuts. In the second half of 2019, the economy is likely to plunge due to a reactionary fall, etc. There will be concern over a recession if there is also the end of demand for Olympic related constructions, a U.S. recession, and a higher yen due to geopolitical risks. 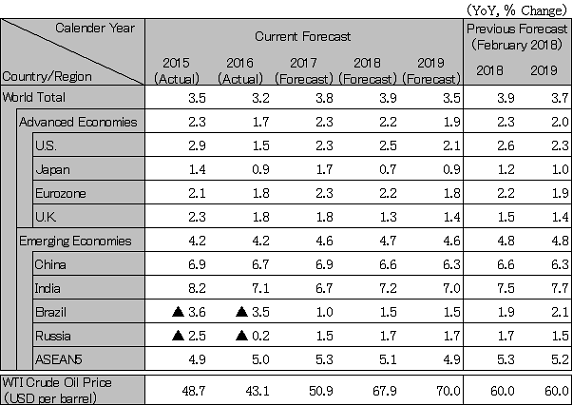 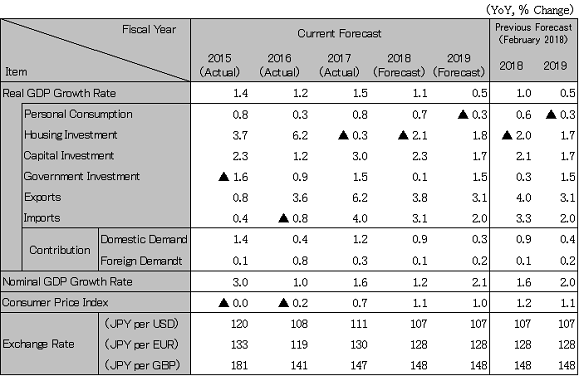