Recession in the EU and Global Economic Slowdown Due to the Majority Exit Vote in the U.K.’s EU Referendum

1.Recession in the U.K. and EU and Global Economic Slowdown

Due to the majority exit vote in the U.K.’s EU referendum, uncertainty over not only the economies of the U.K. and EU but also the world economy has suddenly spread. Stock markets also fell across the globe along with the outlook that corporate earnings will deteriorate.
In terms of the immediate impact, firstly, it is inevitable that the economies of the U.K. and EU will fall into recession in the second half of this year. It will be 2018 at the earliest when the U.K. actually exits the EU, yet the U.K. and EU need to review a significant amount of regulations such as tariffs, the passport system for the financial industry (Note 1), and handling of The Schengen Agreement (Note 2) . These negotiations will likely be protracted since each EU country is expected to take a strict negotiation stance in the review to contain anti-EU interests. In the U.K., uncertainty over the future will spread, and the UK will suffer from a consumption decrease in preparation for a future drop in income and decline in investment from the unclear economic relationship with the EU. As a result, the economy of the U.K. will fall into recession in the second half of 2016. The entire EU will also fall into recession again due to a decrease in exports to the U.K. and decline in personal consumption and capital investment from concerns over the domino effect of the U.K.’s exit.
Secondly, the growth of the world economy will slow down mainly in the trade partner countries of the EU. For exports to the EU in key countries as a percentage of GDP (in 2015), China’s percentage is high at 3.6% compared to 1.6% for Japan and 0.4% for the U.S. and the impact on China due to a decline in exports is significant. Japan and the U.S. will also lose their competitive edge in exports due to a decrease in demand from the EU and their strong currencies. Thus, a decrease in foreign demand is inevitable.
Thirdly, financial and currency markets will become unstable. Central banks of key countries will work to suppress downward pressure on their economies by strengthening their monetary easing approach and inducing depreciation of their currencies. A real currency devaluation competition will develop. The Bank of England has been searching for an opportunity to raise the interest rate while maintaining a low policy interest rate of 0.5%; however, conversely, the Bank of England will turn to monetary easing. The ECB (European Central Bank) is also expected to implement further monetary easing such as expanding the asset purchase amount and extending deadlines as well as further cutting the interest rate. The U.S. FRB will very likely postpone its interest rate hikes that were expected to be carried out twice a year. The Bank of Japan is expected to implement further monetary easing such as expanding the asset purchase amount and further cutting the interest rate in July. The market has a strong tendency to purchase the key U.S. dollar and safe haven yen currencies, and the dollar is strengthening against the pound, euro, and yuan. The yen is strengthening even against the dollar, and in the nominal effective exchange rate (weighted average of the currency rate for currencies of trade partner countries), the currency is the highest. Unless the Bank of Japan launches monetary easing on a scale that surprises the market in the future, the current strong yen is forecast to continue.
If we look to the future of the world economy over the medium term, two risks are notable. The first risk is prolonged recession of the European economy. Until the EU exit negotiations reach a settlement, the suppression on investment and consumption will continue due to uncertainty over the future. Even after exiting from the EU, the U.K. productivity will deteriorate and the economic scale 15 years down the road will shrink by 3.8% to 7.5% (estimate by HM Treasury) compared to the economy when the U.K. remains in the EU. The U.K. accounts for 17.6% of the GDP of the entire EU, second only to Germany, and therefore the U.K.’s exit from the EU will cause the EU to lose its place as the single largest market in the world and will suppress the growth of the EU economy.
The second risk is the spread of a financial crisis. Unlike the Lehman crash, currently, concerns over the financial system such as a nosedive of securitized products and a run on banks has not occurred. However, as negotiations with the EU will be prolonged, the possibility of a management crisis surfacing in the banks of each European country and difficulties in fund procurement caused by shrinkage of the credit market still remain.

Note 1: The system allows financial institutions licensed by one of the EU member countries to provide financial services in other member countries              without obtaining a separate license.
Note 2: Agreement that allows people to cross national borders between European countries without immigration checks.

2.Europe: Increasing Uncertainty Over the Future of the U.K. and EU and Falling into Recession

The U.K. will fall into recession from the second half of 2016. Growth will be 1.0% in 2016 and 0.5% afterwards until the exit from the EU. The economic scale will shrink by 3.7% in 2018 compared to when the U.K. remains in the EU. (HM Treasury forecasts 3.6% to 6.0% shrinkage at the peak.) There is a movement for independence in Scotland and Northern Ireland where the majority voted to remain in the EU, and the risk of a split in the United Kingdom is becoming real.
The EU economy will fall into recession again following the Lehman crash in 2008 and debt crisis in 2011. The Eurozone will see approximately 1% growth from 2016. Germany has high exports to the U.K. numbering 3.0% as a percentage of GDP (2015), and the impact through trade is significant. In addition, concern remains of EU exits by France and Holland where anti-EU populist political parties are demanding referendums for an exit from the EU like the U.K. Moreover, worry over an exit from the euro by Greece where negotiations for specific measures on debt reduction were postponed until 2018 still remains.

3.U.S.：FRB Shelving Interest Rate Hikes in 2016 to Support the Economy

The U.S. economy will maintain 1.7% growth in 2016 and slightly more than 2% growth down the road as well. The economy is driven by domestic demand, and the U.S. is the single key advanced country that has room to reduce the interest rate. Therefore, since the U.S. has a wide variety of financial policies, the country can choose a policy that minimizes the impact. The long-term interest rate of the U.S. will decrease due to the forecast of a postponement of interest rate hikes in 2016, and economic recovery driven by personal consumption and housing investment is expected to continue.

4.China: Further Monetary Easing and Weak Yuan to Respond to the Decrease in Exports for the EU

6.2% growth is expected for the Chinese economy in 2016 which is below the lower limit of the government target (6.5% to 7% growth). The impact from the decrease of exports to the EU is significant. However, since the FRB is expected to shelve interest rate hikes in 2016, the risk of financial outflow from China will decline. Further monetary easing will become possible, and a significant slowdown of the economy is forecast to be avoidable with the weak yuan. However, monetary easing will accelerate the pace of accumulation of corporate debt, and there is a risk that credit concerns will result due to the increase in bad loans.

5.Japan：Deterioration of Corporate Earnings Due to the Settlement of a Strong Yen. Economy to Continue Remaining Flat Even After All Government Policies Mobilized

The yen will strengthen against the pound, euro, and yuan, and the difference in long-term interest rates between the U.S. and Japan will shrink (In the period from June 23 to June 27, U.S. 10-year government bond yield fell by 30bp and declined from 1.75% to 1.45%. The Japanese government bond yield fell by 5bp and declined from -0.15% to -0.20%.) due to the forecast of the FRB passing on interest rate hikes this year. Yen appreciation against the dollar will advance. The BOJ is expected to decide on additional monetary easing such as increasing asset purchases and further interest rate cuts in the Monetary Policy Meeting scheduled on July 28 and July 29. However, it is difficult that the scale will exceed market expectations and cause a depreciation of the yen in reverse. 100 yen/dollar will continue until the end of the year. In 2017, if the U.S. FRB raises the interest rate twice in March and June beyond the market expectation of a one time interest rate hike, the yen/dollar rate will be at 102 yen/dollar in the first half of 2017 and 104 yen/dollar from the second half of 2017, and the yen will slightly depreciate; however, the strong yen will be maintained. Due to the entrenchment of the strong yen, which increased by 15% from the end of last year, corporate earnings will significantly decrease mainly in the manufacturing industry. Further monetary easing by the BOJ and a 5 trillion yen scale of additional public spending in the formulation of a second supplementary budget by the government will enable the economy to narrowly avoid a recession and remain flat. For FY2016, the growth of Japan is expected to be 0.2%, but even after this period, the growth will not reach the potential growth rate of 0.5%. A deflationary mindset cannot be eliminated and even in FY2018, the 2% inflation target will be difficult to achieve. 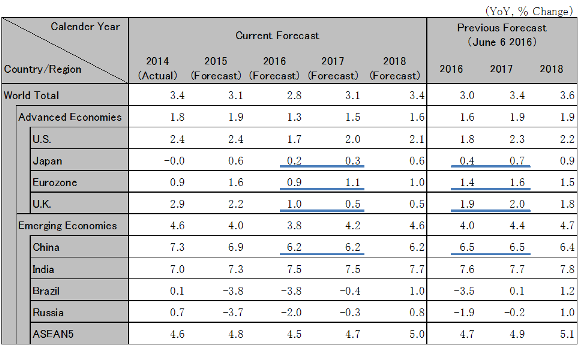 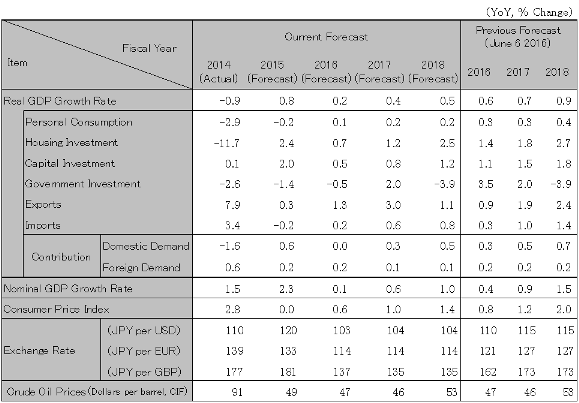