In 2017, the world economy will continue to move toward growth in mainly advanced countries. Owing to the recovery of corporate investment in the U.S., ending of austerity in the eurozone, and fiscal stimulus in China and Japan, from the second half of 2016, the U.S., eurozone, China, and Japan have respectively been regaining momentum in terms of economic recovery. In the meantime, expectations for investment in infrastructure and drastic tax cuts by the new Trump administration in the U.S. boosted long-term yield resulting in a strong dollar. If the strong dollar continues, there is a risk of a slowdown of the U.S. economy and financial outflow from emerging countries. However, this outlook assumes expectations from the market will be adjusted in the first half of 2017 following the inauguration of the new administration, and the dollar is estimated to slightly weaken. 110 yen/dollar is projected in the first half of 2017 after peaking at the recent exchange rate of 115 yen/dollar. In the second half of 2017, 105 yen/dollar is expected. The world economy will continue to experience recovery overall although the U.S. will suffer from a mild slowdown in the second half of 2017 due to the impact of the recent strong dollar.

2.U.S.: Economic Recovery Continues Despite a Slight Slowdown in the Second Half of 2017

The trillion-dollar infrastructure investment plan of the new Trump administration relies on private funding. Therefore, the plan is expected to be realized at a one-fourth scale while the large tax cut plan that will likely expand the national debt by approximately 5 trillion dollars in 10 years will be scaled down by half. Implementation of these plans is estimated to be in 2018 at the earliest. The FRB took the step of raising the interest rate in December 2016 for the first time in a year and only two interest rate hikes are expected in 2017. The regulations on shale development, etc. will be relaxed under authority of the President in 2017 which will boost capital investment. Recent increases of long-term yield and the strong dollar will apply downward pressure on housing investment and exports in the second half of 2017. However, from the beginning of 2017, the strong dollar will reverse course, and as a result, the U.S. will experience continuous growth of 1.6% in 2016, 2.1% in 2017, and 2.4% in 2018.

3.Europe: U.K. Slows Down due to a Deterioration of Purchasing Power. Brexit and Uncertainty Over the Banks Causes Stagnation in the Eurozone

The U.K. will experience a slowdown caused mainly by the deterioration of purchasing power due to a depreciation of the pound even though the U.K. will avoid a recession. Growth of 2.0% in 2016, 1.0% in 2017, and 1.2% in 2018 is expected. Permission for financial businesses in the U.K. will likely be invalid in the EU after the U.K. exits the EU, and as a result, the “City” will slip in its position as a financial center. The brakes have already been applied to increases in real estate prices.
The economy of the eurozone is in a recovery mood, but compared to 1.6% growth in 2016, growth in 2017 and 2018 will stagnate at 1.4%. Slowdown in exports to the U.K. and continuous uncertainty over banks will hold down the economy. The ECB’s decision on December 8, 2016 to scale down the level of quantitative easing from March 2017 in exchange for extending the deadline for quantitative easing until the end of 2017 has caused yields of national bonds of countries in a debt crisis such as Italy to soar. Furthermore, on December 9, 2016, the ECB rejected a request to extend this year’s deadline to raise capital from Monte dei Paschi di Siena which is the third largest bank in Italy. If a bail-in (forcing corporate bond holders of banks to take losses prior to the injection of public funds) directive is applied, cash outflow will spread to other banks in Italy. Moreover, if a banking crisis does occur, other countries facing a debt crisis including Portugal will be affected.

4.China：Supply-side Structural Reform and Measures to Suppress the Housing Bubble Holding Down the Economy. Slowdown to 6.3% in 2017

China will see a gradual slowdown in growth at 6.7% in 2016, 6.3% in 2017, and 6.2% in 2018. Business confidence will improve due to an expansion of infrastructure investment from fiscal stimulus. Employment will shift from the manufacturing industry to services. Stable personal consumption such as culture, entertainment, and healthcare will continue even after 2017 in the backdrop of stable employment. On the other hand, supply-side structural reform and measures to suppress the housing bubble will slow down investment in fixed assets in the manufacturing industry and real estate industry. For exports, high value addition is not progressing, and China is losing competitiveness in exports from increases in labor costs, and as a result, exports will struggle. The government plans to keep the yuan flat at the effective exchange rate (weighted average of currency exchange rates against trade partner countries) although the yuan will fall against dollar. The government is also cautious about monetary easing. China will tolerate a slowdown to 6.0% to 6.5% growth while supporting the economy with public finance.

The Japanese economy will continue to grow at 1.2% in FY2016, 0.8% in FY2017, and 0.9% in FY2018 which exceed the 0.4% potential growth rate, and the deflationary gap (the gap between potential GDP and actual GDP) will be eliminated at the end of FY2018. Inflation will be 1.1% in FY2017 and 1.4% in FY2018 and will approach the 2% target. Personal consumption has recovered from the consumption tax hike in April 2014 and is entering a virtuous cycle of increases in income and consumption, and in FY2017, personal consumption will grow further. Government investment will increase due to delays in the implementation of FY2016 large stimulus measures to FY2017. Concern over the strong yen at a level lower than 100 yen/dollar will retreat and capital investment will also be stable in the backdrop of improved corporate earnings. 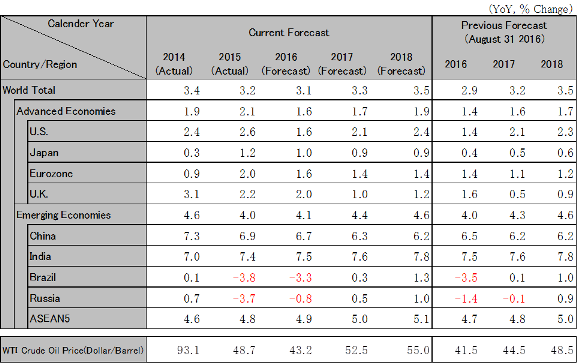