Friction in European Politics Despite Continued Recovery of the World Economy

1.World Economy: Continues to Recover, But Financial Markets Fluctuate According to the Results of the Presidential Election of France on May 7

The world economy is gaining momentum in terms of recovery due in part to the economic recovery of resource-rich countries following the rally in oil prices, despite the confusion brought about by Brexit and the birth of the Trump administration. In advanced countries, monetary easing will continue and oil prices will stabilize at the mid-50 dollars/barrel range due to the shale production increase in the U.S. The world economy is expected to continue to recover at 3.4% in 2017 and 3.5% in 2018. However, the possibility of Le Pen, leader of the Front National, winning the presidential election in a second run-off on May 7 has reached 50%. Front National is promising to hold a referendum on France’s EU exit. Even if Le Pen is victorious, a referendum will not be held immediately, but the emergence of anti-Euro groups in Italy and Greece can be triggered and an upsetting of financial markets such as a nosedive of the euro and the flight of funds from banks in countries with a high potential of exiting the Euro is a serious concern. If a referendum is held within a few years in France, which is a core EU country, the unity of the EU may be shaken

2.U.S.: Stable Recovery with a Low Potential of Economic Overheating from Tax Reductions and Infrastructure Investment

Personal consumption and housing investment are stable, and the growth rate is expected to increase to 2.3% in 2017 and 2.2% in 2018 from 1.6% in 2016. For employment, the U.S. has nearly reached the full employment level, and if the Trump administration carries out a tax reduction and infrastructure investment targeting 3.5% to 4% growth, the economy will overheat and inflation will result. However, tax reductions will be implemented from 2018, and the scale will be about 0.5% as a percentage of GDP; therefore, it is believed the effect of tax reductions will remain at pushing up the growth rate of 2018 by 0.1%.Infrastructure investment is not expected to be great since the Republican Party in Congress is not positive about using the national budget. As a result, there is limited risk of the economy overheating. Since the U.S. FRB is expected to carry out interest rate hikes only two times, the strong dollar is forecast to be adjusted (110 yen/dollar for the first half of 2017 and 105 yen/dollar for the second half of 2017 and 107 yen/dollar for 2018).

3.EU: Although Recovery Continues, Risks Are a Banking Crisis in Italy and Debt in Greece

The actual exit from the EU by the U.K. is two years down the road. Depreciation of the pound improved the competitiveness of exports including tourism, and as a result, a recession has been avoided. For future outlook, growth is expected to slow to 1.4% in 2017 and 1.2% in 2018 due to weakening purchasing power.
In the eurozone, continuous monetary easing and the end of austerity is propping up the economy. A recovery at the level of the potential growth rate continues and 1.5% in 2017 and 1.4% in 2018 are expected. However, in Italy, the ratios of bad loans are higher in overall lending portfolios of many banks besides Banca Monte dei Paschi di Siena that the government decided to bail out, and a banking crisis is a concern. Greece is under pressure of further austerity from the EU, and there are concerns over the emergence of anti-euro and anti-EU political forces.

4.China: Recent Economy Is On Track for Recovery, and Stable Growth at 6.5% Is Possible in 2017

The Chinese economy is forecast to grow stably at 6.5% in 2017 and 6.2% in 2018. With a change of Communist Party leadership around the corner in the autumn of 2017, management of the economy prioritizes stability rather than reform. Restrictions on capital will be relaxed for domestic investment, but restrictions on overseas investment will be tightened. Slight financial restraint is expected to avoid the expansion of corporate debt, the housing bubble, capital outflow, and sharp fall of the yuan. On the other hand, expansive management of financial policies such as an increase in infrastructure investment by state-owned companies and extension of tax reductions for small cars to the end of 2017 is being carried out with the aim of economic stability. Reforms including supply-side structural reform and relaxation of restrictions on capital are expected to be promoted again from autumn 2017. The U.S. is scheduled to implement an antidumping duty on Chinese products including steel from April 2017, and trade conflicts between the U.S. and China are likely to intensify. However, any decrease in exports will be balanced out by a decrease in imports, and as a result, concerns over any immediate adverse influence on the economy are small.

5.Japan: Continuous Shortage of Manpower Will Result in Upward Pressure on Wages and Commodity Prices

Japan is near the full employment level. The Bank of Japan will no longer be able to further pursue a negative interest rate and maintain a monetary easing policy focusing on a zero interest rate for 10-year government bonds. The government is expected to implement large scale economic stimulus measures in FY2017 on a scale of two thirds of the 28 trillion yen large economic stimulus measure in FY2016 in order to avoid another postponement of the consumption tax hike scheduled in October 2019. Due to the decrease in concerns over the strong yen, corporate earnings are expected to improve, which will generate a positive growth cycle of income and consumption. As a result, the economy is forecast to grow at rates of 1.0% in FY2017 and 1.1% in FY2018, which exceed the potential growth rate of 0.8% (estimate by the Cabinet Office). Labor shortages will be more notable and the Consumer Price Index excluding perishable food will reach the 2% target at 1.1% in FY2017 and 1.4% in FY2018. 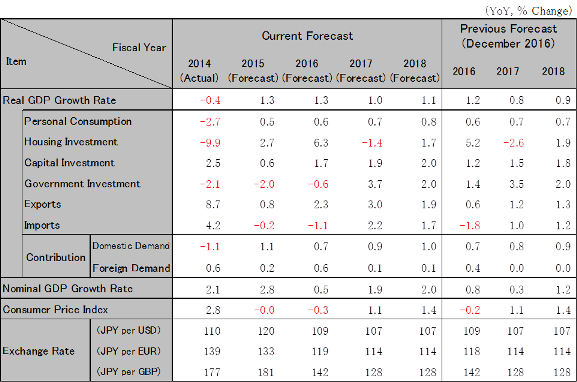