Increasing Uncertainty over the World Economy Due to Brexit

1.U.K. Vote to Leave the EU Increases Uncertainty Over the Outlook Downward Impact on the World Economy from the Second Half of 2016

The U.K. voted to withdraw from the EU on June 24, and the impact on the real economy is expected to spread to the world in three phases from the second half of 2016. In the U.K., investment will decline due to a sense of uncertainty over the outlook, purchasing power will decrease from the depreciation of the pound, consumption will also fall, and a recession will result. As a result of the impact from the situation in the U.K., firstly, the European economy will experience a slowdown because of a decrease in exports to the U.K. Secondly, Eurosceptic political parties will be forced to merge, and the political climate of the EU will become unstable. In Italy, a constitutional referendum is expected to be held in October which in reality is a vote of confidence in the administration. The risk is that current Prime Minister Renzi will be ousted due to a policy of restructuring banks with bad debt, and the Eurosceptic “Five Star Movement” political party will join the government. Thirdly, the impact will spread to countries highly dependent on exports to Europe such as China, which will result in downward pressure on the world economy.
In response to the slowdown of the world economy, central banks in key countries will continue monetary easing measures. The Bank of England took the step of resuming quantitative easing and cutting interest rates on August 3 and is expected to move toward further easing. The Bank of Japan will expand monetary easing in September. TheECB is also expected to carry out further easing within this year. The U.S. FRB was scheduled to raise interest rates twice within 2016 as of June 15, but is now forecast to raise rates only once at year end. As a result, currency exchange rates in the second half of FY2016 will hover around the same level as now, and rates of 100 JPY/USD, 1.1 USD/euro, and 1.3 USD/pound are expected.

Dollar appreciation has progressed by approximately 20% from the second half of 2014 to the beginning of 2016, and corporate activity has stagnated. The country’s economic growth fell below 2% for three consecutive quarters from the October-December 2015 period to the April-June 2016 period. As a result, it was expected that the U.S. FRB would slow down the pace of interest rate hikes and the long-term interest rate declined. Dollar appreciation has slightly corrected since the beginning of 2016, and corporate activity is making a recovery. Due to an improvement in the employment environment, personal consumption and investment in housing will be stable. The growth of the country will recover to the range of 2% to 2.5% from the July-September 2016 period.

In the U.K., business confidence has been significantly deteriorating following the referendum. The pound dropped by 12% against the dollar, and household real purchasing power has declined. The country will fall into recession since the second half of 2016. The Bank of England embarked on comprehensive quantitative easing on August 3 and will continue to attempt to halt the falling economic performance with further additional easing. The growth rate from the second half of 2016 will fall below 1%.
Although the Eurozone economy was on a trend toward recovery, the Eurozone economy will slow from the second half of 2016 partly due to the decrease in exports for the U.K. The growth rate will decline and end up at 1.4% for 2016 and 1.1% for 2017. Further financial easing will be carried out, but since the emphasis continues to be placed on fiscal discipline, a less than 2% inflation target will be difficult to achieve due to a shortage of demand.

4.China：Reform on the Supply Side and Decline in Exports to Europe Slow Growth to 6.2%, below the Government Target from the Second Half of 2016

The government of China is going to accelerate a reduction in production ability in the coal and steel industry through reform on the supply side under a government initiative from the second half of 2016. In addition, the manufacturing industry of machines and electrical equipment will be impacted by a decline in exports to Europe (mainly the U.K.). Due to the unwillingness to launch monetary easing and carry out large size public spending in fear of a nosedive of the yuan and expansion of a housing bubble, the government will tolerate a slowdown of growth in the range of 6.0% to 6.5%.

5.Japan：Growth at 0.5% Potential Growth Rate Shielded from the Impact of the Strong Yen and Decrease in Foreign Demand by Fiscal and Financial Policies

The Japanese economy is treading water. The majority exit vote from the EU in the U.K. and the settlement of a strong yen of 100 JPY/USD to 105 JPY/USD is having a significant impact, and the economy is poised for a recession. The BOJ is expected to carry out further monetary easing such as further cuts to the interest rate on September 21. However, the best hope is to avoid a fall of the currency exchange rate below 100 JPY/USD. The government approved a large 28.1 trillion yen stimulus package that is estimated to directly increase GDP by approximately 4 trillion yen, but the package will not produce results until after the October- December 2016 period. However, by preventing a further deterioration of business confidence, personal consumption that decreased in FY2014 and FY2015 will turn into an increase in FY2016, and as a result, a recession will be avoided. From FY2016 on, the economy will continue to grow at a potential growth rate of 0.5%. 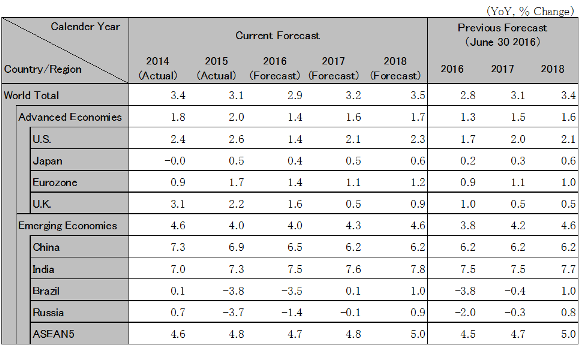 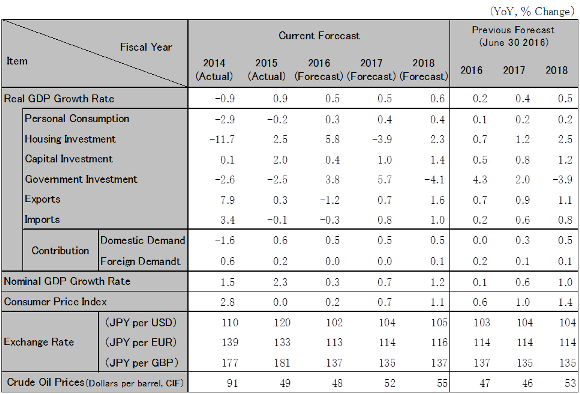